Designed for superlative performance in long-form reading on screens, in UI, and in apps, Portada Arabic is a modern font family and icon set that’s clear and readable in restrictive digital environments and warm in print. Also available in variable font format. The Latin-only version is available here.

For everyone wishing for a modern Arabic typeface that’s clear and readable in restrictive digital environments, meet Portada Arabic by Sahar Afshar. As an expansion of the Portada family, Portada Arabic addresses the main problems of typefaces on screens: font families with a slightly flared structure may appear fickle and unsteady, pixel grids change from one screen dimension to another, and space is always a high concern. So low contrast fonts have become the go-to choice on small screens to save space and carry a modern tone. Portada Arabic now provides a Naskh-style option for these restrictive digital environments, putting to rest the old idea that screens require low contrast fonts. The screen has met its match.

The unique Portada Arabic was created from and for the digital world — from e-ink or harsh grids to Retina capability — and these properties are also what makes it warm in printed formats. Portada Arabic’s text and display styles were engineered from the Naskh style for superlative performance to make great use of balanced letterforms, ample character height, clear interior negative space, and its subservient personality. After all, legibility always takes priority in text.

The Portada Arabic family is made of four text styles, six display styles, two icon sets, and comes in two variable fonts. The text styles have more generous spacing and less contrast than the display; when printed, these details bring warmth to paragraphs. Portada Arabic’s display styles enact slight changes while reducing the individual width of each character and keeping the internal space clear, all to retain their digital clarity. As a free download, the exhaustive set of dark and light icons are designed to maintain Portada Arabic’s consistent presence in modern communication and apps, whether as a word or an image.

In addition to the rest of the multiscript Portada family, Portada Arabic also supports Persian, Urdu, Dari, Aimaq, Dehwari, Talysh, and Qashqa’i. Digital magazines, printed newspapers, your favourite novel, and all forms of continuous screen reading benefit from Portada Arabic’s features. This family also covers many of the needs developers have: user interface, showing data intensive apps on screen, even one-word directives and dialogs. Portada Arabic is a rare Arabic typeface made to be applied across printed material and the digital world, and especially for extensive, clear screen use.

Combining the constructed and human feel while brushing away the dust from a century of geometric derivatives.

14 styles from Hairline to Extrabold with Italics

more than 140 languages that use the Latin script 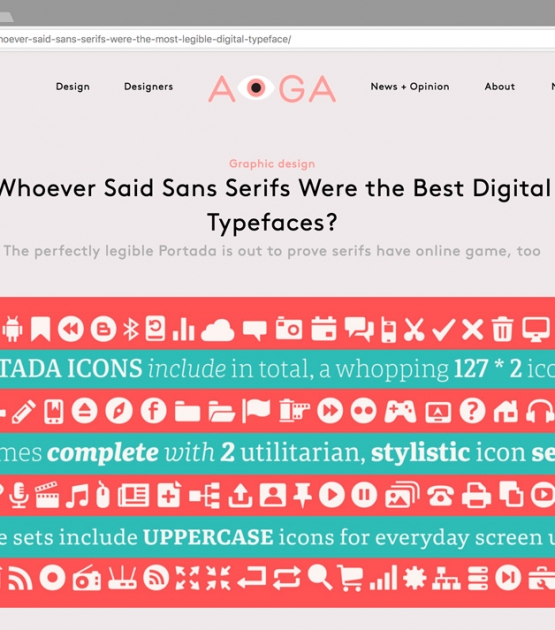 “Whoever Said Sans Serifs Were the Best Digital Typefaces?”

Anyone who knows a decent amount about font history has heard of famous fonts made for the computer screen. Georgia and Verdana were made for the pix...