A multi-functional type family, Ebony remains true to TypeTogether’s focus on stylish typographic answers for the complex needs of printed and digital works. Ebony promises great performance in branding and advertising with its dark weights and taut, powerful curves. In short, Ebony is a daringly bold sans serif, now with support for Vietnamese.

Man is jailed after posting video of himself drinking while driving on Facebook.

Columbus: An Ohio man took a cellphone video of himself drinking while driving and posted it on Facebook, leading to his arrest hours later in a case that illustrates how social media can help law enforcement, a sheriff’s office said. Someone tipped off deputies about the video after it was posted on Monday, and the vehicle was stopped that afternoon south of Columbus, the Franklin County sheriff’s office said.

A copy of the 12-second video provided by the sheriff’s office shows a man sitting in a vehicle, looking into the camera while music plays in the background, then raising his eyebrows and taking a swig from a partially covered bottle.

He doesn’t speak. As the clip ends, the camera is flipped around to show a hand with only one finger raised to guide the steering wheel as a wiper moves across the vehicle’s windshield.

The driver, Dustin Rittgers, 28, pleaded not guilty on Tuesday in Franklin County Municipal Court on five misdemeanor charges, including operating a vehicle under the influence of alcohol or drugs and having an open container in a vehicle. Rittgers, of Obetz, had no publicly listed phone number. A public defender listed in his court docket didn’t immediately respond to a message seeking comment.

Some typefaces need time to ripen. Veronika Burian and José Scaglione made the first sketches for Ebony back in 2008, but it took a few years of maturing in a drawer to be developed into a multi-functional type family. Ebony remains true to TypeTogether’s focus on stylish typographic answers for the complex needs of magazines, newspapers, and books, whether printed or digital. Additionally, Ebony goes far beyond editorial use and promises great performance in branding and advertising.

Ebony’s range of dark weights with taut and powerful curves can boost any headline, while the lighter weights create an approachable and clean feel in blocks of continuous text. Ebony does not fall short in aiding legibility either. Letterforms have a distinct direction of ductus, a wide overall stance, and features like the top serif on the lowercase ‘l’ help make glyphs clearly distinguishable from each other.

Ebony is a type family that cleverly seeks a balance between the openness and legibility of humanist sans serifs and the striking and more regularised character of grotesques. The lettershapes feature generous counters and open terminals with crisp angles, both of which daringly grow in colour and width as the typeface increases in weight. Beginning from this position of strength, Ebony also shows a quirky side in some of its shapes: the vertical fractions, the @ symbol, the oldstyle numbers, and the short descenders. Its character set has been significantly expanded to include the tonal Vietnamese alphabet, German eszett, and others.

The predominantly slanted style of Ebony’s italics is broken up by some letters that are more in line with the classic cursive appearance, such as ‘a’, ‘e’, ‘f’, and ‘l’. This, together with a forceful italic angle, ensure a change in texture within a block of text, despite sharing the same weight and width as the upright letters. The complete multilingual family comes in 18 digitally dutiful and print-prepared styles that tend toward the heavier part of the weight spectrum. Whether as the headliner or as the paragraph text, Ebony has been optimised for forward momentum and approachable clout in branding. 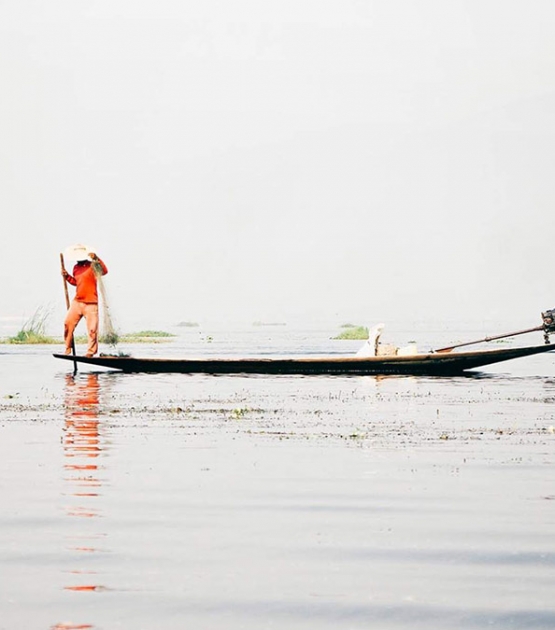 Ebony in use in Dinis Bazgutdinov’s Myanmar travel diary.