Alizé is a three-weight font family inspired by sweeping 16th century chancery italics. It is a high-contrast face created with syncopations in axes and proportions, and with subtle irregularities which look handmade.

Traversing the work of Heather Phillipson

Heather Phillipson’s art presents viewers with a floating cacophony of human sensations: at a recent live performance in London, a beating heart pulses violently before me. A young woman appears on a cycling apparatus, moving, her heart rate accelerating; I hear verbiage un-spooling from the depths of the mind — or is it the Internet? It echoes and resounds throughout the auditorium at the Whitechapel Gallery, where I sit. Is this the artist’s voice that the audience hears, or is the figure before us a figment of a shared imagination from the crevices of social media?

“I had it installed especially to catch all the clichés. Hearts are the best bins for clichés,” we hear the artist’s voice pronounce against the keys of an electric keyboard.

I don’t quite understand what is happening. Indeed, I am not sure I quite understand Phillipson’s art much at all, but that is the main reason I like it. Phillipson’s practice eschews simple categorization, but rather explores the intersecting corners of disciplines. In addition to her work as a visual artist, Phillipson is quickly becoming celebrated as a poet (the June issue of Poetry features a portfolio of her work), and her performances draw on an array of literary and visual sources: there are video, music, props, and live and recorded speech that unfurls in poetic verse.

These constituent pieces will rarely make sense alone. Rather, they drift and float together, inviting spectators into an interior world until they are left questioning a singular, often fundamental emotion

Alizé is Tom Grace’s three-weight font family inspired by the chancery italic of the 16th century and named for the easterly trade winds that blow through from Africa to the Caribbean. It is a high-contrast face created with syncopations in axes and proportions, and with subtle irregularities which look handmade. These qualities form a lively and delicate weave suitable for setting a single word, a special expression, or a short block of prose.

The family does not contain an unslanted roman, but instead promotes the italic as the primary style in keeping with common printing conventions of the 16th and 17th centuries. Historically, the italic lowercase predates inclined capitals by several decades so, as a nod to this typographic evolution, Alizé’s capitals, small capitals, and figures are slightly inclined to match the energy of the lowercase.
The low x-height and long ascenders and descenders — features associated with purposefulness, finesse, and luxury — are reminiscent of the Venetian-style italic, but are further emphasised. Unlike the Venetian italic, however, Alizé has a sharp slope, giving a prominent sweep across the page, similar to its trade winds namesake. The complete Alizé family, along with our entire catalogue, has been optimised for today’s varied screen uses.
 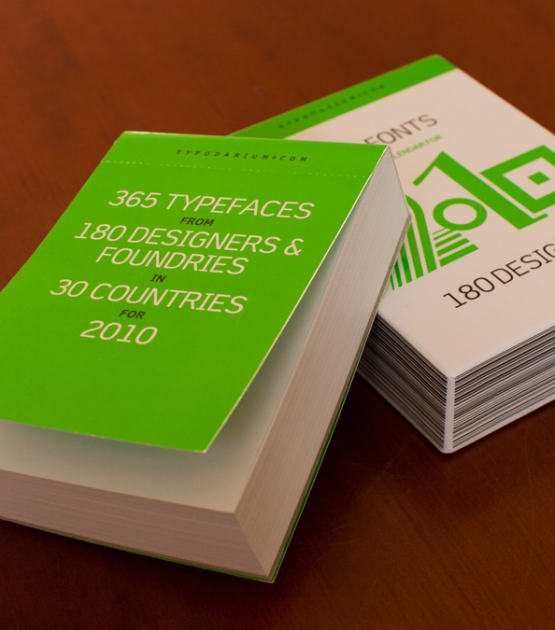 Since 2008 the Verlag Hermann Schmidt has been publishing this special type of calender showcasing 365 different typefaces, one for each day.