Most of the TypeTogether team and some design partners met up in Girona, Spain, and what a fantastic time it was! Several specialists gave presentations in a relaxed and inviting format, allowing for in-depth discussions throughout the talks. Since we live in different countries worldwide, it was a great opportunity to get to know each other better, have a ton of fun, and focus on workflow and upcoming projects. A beautiful location, delicious food, and loads of productivity.

As readers probably know, the TypeTogether team is literally spread around the world. Our collaboration on day-to-day projects is made possible by a series of Internet-based tools that allow information exchange and meetings with people spanning over 13 time zones, from Kansas City to Beijing. Interacting through cyberspace is not as rewarding as doing it face to face though, so at least once a year we travel and take a few days off the usual routine to brainstorm, learn from each other, chat about typography, and have a lot of fun.

In 2015 we had a small get-together in Prague, swapping our roles within TT and creating the fun multilayer font Ahoj. 2016 was a year of celebration, our 10th anniversary, for which we organised a party in conjunction with the ICTVC conference in Thessaloniki, Greece. This year we chose a beautiful rural house located in a valley, some 30 minutes away from Girona, Spain. Most of the core TypeTogether team was there, and we also invited some of our trusted collaborators and consultants to discuss different ongoing and future projects. In the mornings we held informative lectures that were followed by lively and enlightening debates on each of the subjects. 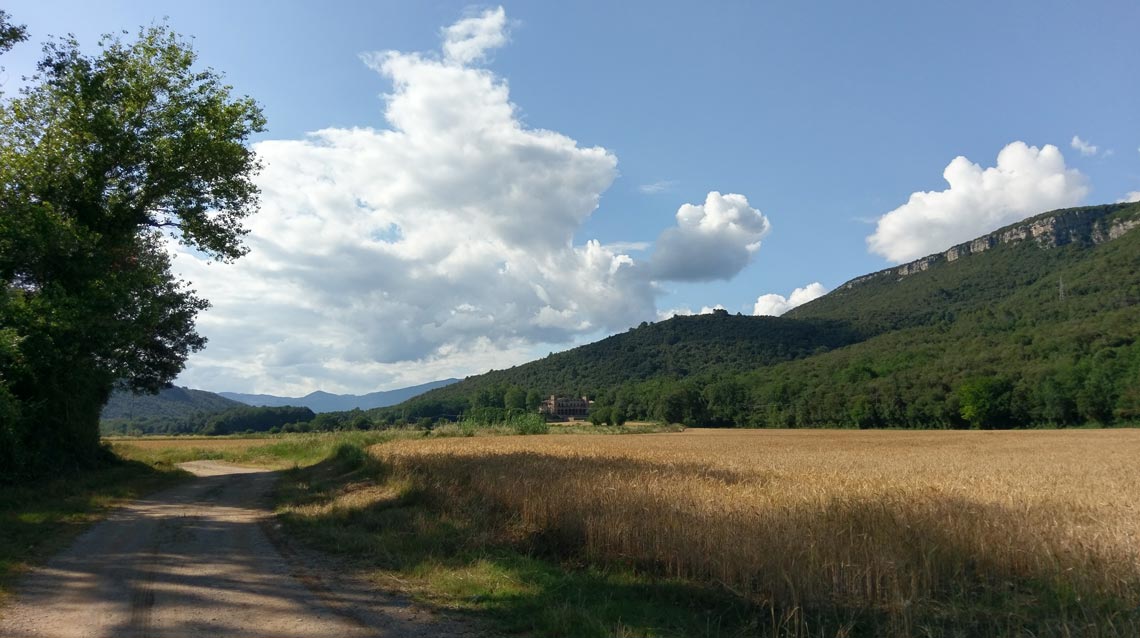 Azza Alameddine started with a workshop on typesetting Arabic that proved much more challenging than anyone had expected. Most of the problems arise from bi-directionality issues such as using Latin punctuation and numbers within the context of an Arabic paragraph. Performance and interaction with desktop publishing applications seems very slow and plagued with bugs when compared to typesetting the Latin script.

Continuing with the Arabic theme, Sahar Afshar gave us a crash course on the principles of the script. She showed us the different calligraphy styles and how they have been traditionally used to make a distinction between text and display, becoming increasingly decorative and expressive. She pointed out the existing challenges, mainly of a technological nature, of converting the built-in complexities of the script into acceptable typographic forms. The Middle Eastern sessions were completed by Liron Lavi Turkenich who gave us an overview of Hebrew typography’s history. She concluded that using secondary styles, such as bold or italic, are not very commonly seen in Hebrew texts, and that there is a preference to use Latin caps when setting bi- or trilingual signs. Caps or small caps apparently look more pleasing next to the squarish Hebrew letters.

Ben Mitchell explained in detail three different kinds of Thai letters: those with loops, the so-called unlooped, and what he called the ‘hidden loop’ style, where the loops that usually indicate the origin of the strokes are only hinted at by means of hook-like shapes — sometimes very small. He explained that the origins of the loops are not so obvious and that historical Pallava writing did not have them. They only started to appear in the 13th century manuscripts, and with the arrival of printing they were formalised and turned into archetypes. Ben encouragingly mentioned that he sees a broad range of possibilities for innovation within the Thai script, such as exploring a contrasted loopless design.

Irene Vlachou presented a beautiful project for the art festival Documenta in which she worked with a consistent reverse-contrast Greek. These surprisingly legible lettershapes gave us all a clear understanding of how much more exploration and experimentation is needed so far. 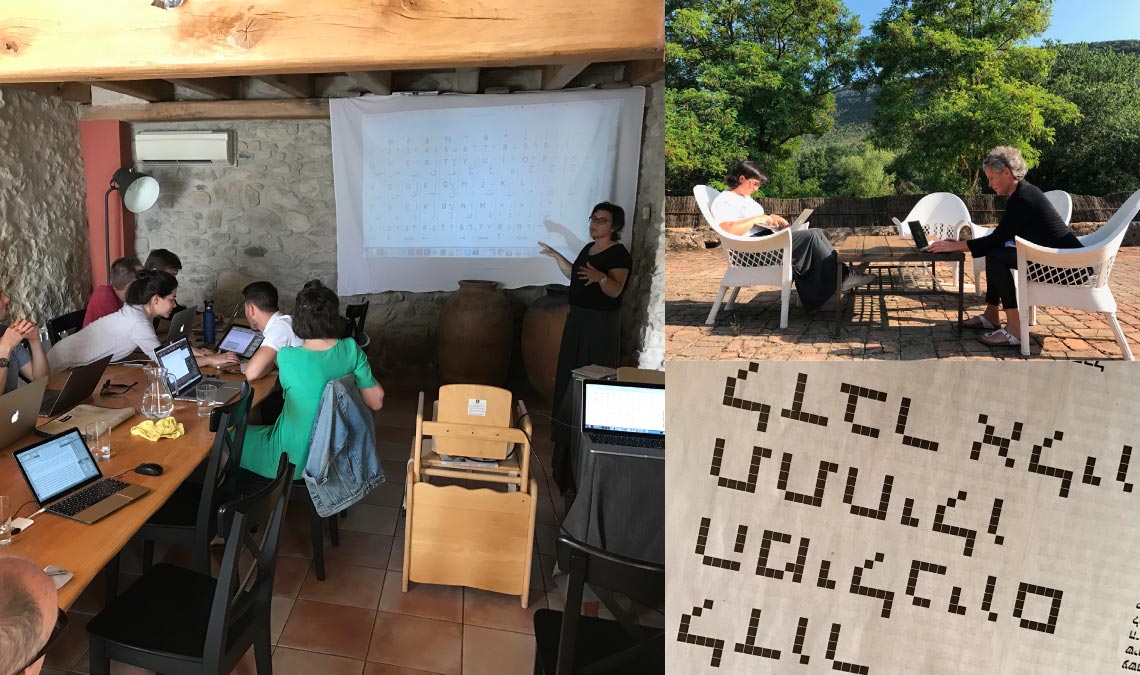 Finally, Valentin Brustaux explained the basics of the Telugu script, showing examples of newspapers, books, and magazines. And Filip Blazek gave us an enlightening crash course on language-specific typesetting.

One of the objectives of the meeting was to improve our internal workflow, to ensure more efficiency, and enhance our quality assurance. The two afternoon sessions were led by Gerry Leonidas and we believe we made a lot of progress in these logistical areas.

Not everything was work, though. In between the lectures and debates about different topics around our trade, there was plenty of time for fun. The bravest souls dared diving into the freezing pool while the rest of us sunbathed with a surprise look on our faces. And Roxane Gataud introduced the team to a guessing and charades game that painted a clear picture of just how much we are willing to embarrass ourselves. Of course, the obligatory single-malt whisky helped with that!

And to finish this blog entry, there was the food. Collaborative cooking is just as hard as collaborative design and each teammate showed some of their ‘skills’. Joshua Farmer and José Scaglione created new trends with their barbecueing-in-the-rain act, accompanied by umbrellas and magazine paper over their hamburgers. Pilar Cano and Joancarles Casasín prepared their authentic Catalunyan stews, in both veggie and meaty formats, and Veronika Burian made her acclaimed salad with apple. (Maybe someday she will make the recipe available online for everyone’s enjoyment.)

We met friends old and new, got a lot of work done, and made exciting plans for the future. The trip was quite complex, but we all left exhilarated, energised, and ready to do more great work for you. In fact, since then, we’ve already released one type family and have two more being prepped for next month. We’re happy to be moving forward and we wanted to thank you for your support. So keep your eyes peeled because there’s more and better to come from the TypeTogether team! 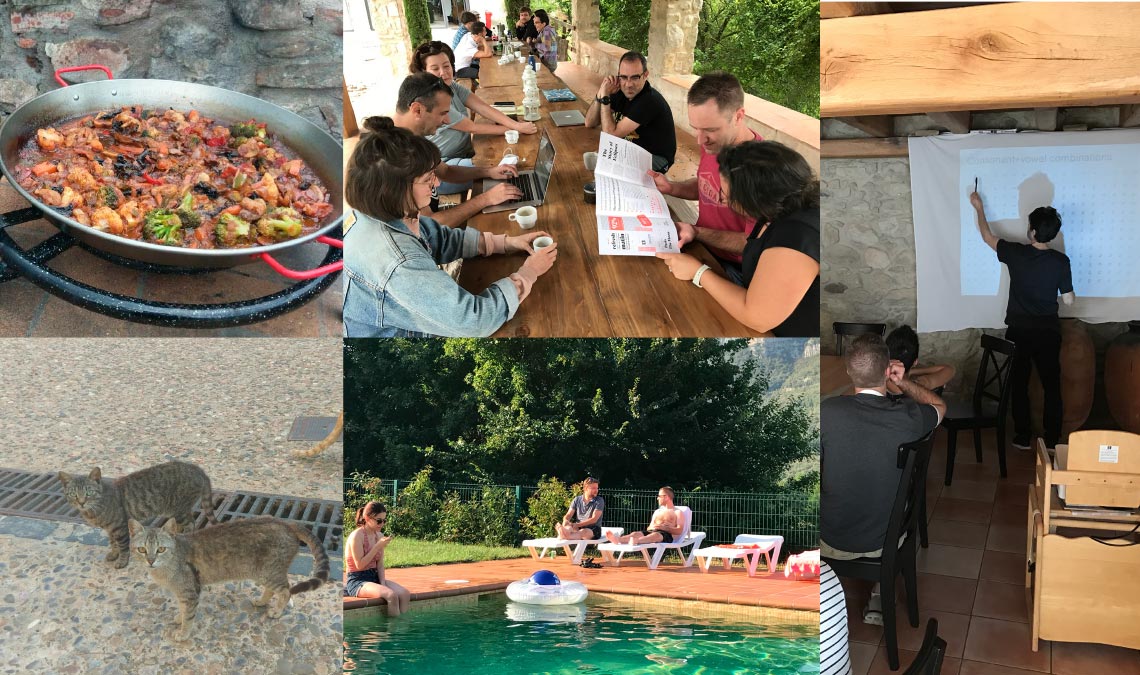