Soleil is a sans serif font family that excels in geometric tranquility. Where other geometric typefaces lean toward the austere or bland, Soleil gives slight hints of a real personality and bring what could have been another tasteless sans into our current time.

London’s battle of the balconies.

The debate about Britain’s future has taken an unexpected new twist: a battle between north London neighbors.

LONDON (Reuters) – The debate about Britain’s future in the Europe has taken an unexpected new twist: A “battle of the balconies” between north London neighbors unfurling competing pro- and anti-Brexit banners.

Unimpressed by a large “Vote Leave” banner appearing on the balcony next door, a man named by British media as Frank Chalmers, 61, unveiled his own sign that added the words, “…if you want to cut workers’ rights”.

The leafy, suburban locale was not previously regarded as a key battleground in the debate around the June 23 referendum on Britain’s EU membership. The story emerged after Chalmers’ son, Malcolm tweeted a picture of the opposing balconies and wrote: “My parents’ neighbors have put up a large ‘Vote Leave’ sign. It seems my dad’s response is to get creative. #Remain.” He told the London Evening Standard newspaper that his father gave his neighbors a bottle of wine as a peace offering.

Soleil is Wolfgang Homola’s sans serif font family that excels in geometric tranquility. Where other geometric typefaces lean toward the austere or bland, Soleil gives slight hints of a real personality and bring what could have been another tasteless sans into our current time.

Soleil sets itself apart through measured characteristics which recognise its rational heritage and still grant it personality. The circle and square provided the obvious foundation for Soleil’s letterforms, but many optical corrections were necessary in order to introduce more fluidity into the rather stiff concept of a contemporary geometric typeface. These include asymmetrical counters, a lowercase ‘m’ with a second shoulder that meets while the first is still curving, the increased slant on the top of the ‘t’ as the weight increases, and a large x-height for legibility at a distance or in small sizes. Its personality is seen, for example, in the friendly lowercase ‘f’, the perfect curve of the open ‘c’, the large x-height, and the ampersand. The italics were also meticulously designed rather than simply slanted through digital means.

Soleil is based on the modernist ideas of clarity and reduction to essential forms. Its lettershapes, however, are not the result of brute geometric construction, but of a design process that brings together simplicity with fluid rhythm. Soleil fits a wide range of potential applications: signage and wayfinding systems, book and magazine design, branding and corporate publications.

Soleil consists of seven weights with respective italics and a twisting, two-sided Escher-like display style called Magic Caps. Its character set covers over 100 languages that use the Latin script. OpenType features allow for the implementation of typographic niceties such as small caps, both tabular and proportional lining and oldstyle figures, ligatures, alternate characters, case-sensitive variants, and fractions. All together, Soleil’s contemporary and pleasing characteristics make it a great choice to replace overused or unpalatable geometric typefaces. The complete Soleil family, along with our entire catalogue, has been optimised for today’s varied screen uses. 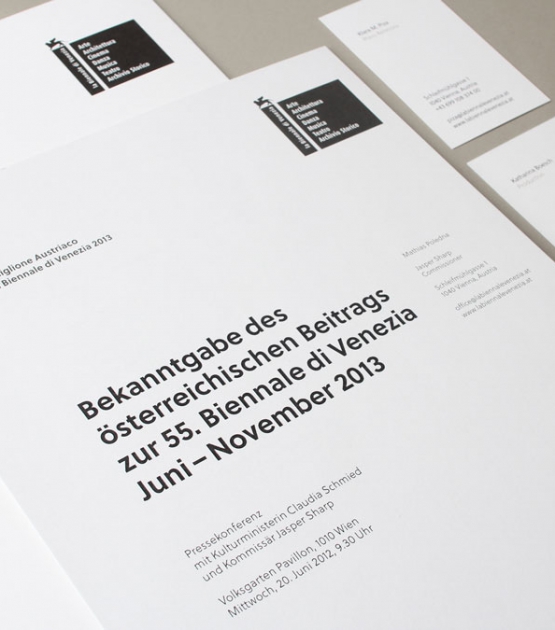 The Austrian design studio sensomatic were commissioned to create the visual identity for the Austrian pavillon at the Biennale Venice 2013. They cho...