Trevor is a narrow, sturdy slab serif — both heavy and kind — arousing sympathy for the subject at hand. It connects with others by consciously riding the line between being personal and commanding, inky and rounded.

Thespians seem to forget the people responsible for creating the art form of drama, and that’s only to the detriment of their own careers.

Richard III by William Shakespeare. A historical tragedy play from the great British playwright William Shakespeare was written around the time of late 1500s, and was a conclusion to Shakespeare’s first tetralogy. Richard III is playwright’s second longest play in the canon, right there after the famous Hamlet, and is one of the most important plays every actor should read. Best quote: “I have set my life upon a cast, And I will stand the hazard of the die.”

The Cherry Orchard. Named as a comedy by Russian playwright Anton Chekhov, The Cherry Orchard is his last and one of the most famous plays, which first opened in 1904 in Moscow. However, due to lack of farce in the material, Konstantin Stanislavski directed it as a tragedy. Almost any actor will eventually run into Chekhov’s work, and rest assured, The Cherry Orchard will be there somewhere.

Both kindly and commanding, a neighbourly slab serif that sees the best in others.

Teo Tuominen’s Trevor (formerly known as Walter) took its first breath as a revival of an 18th century antiqua, but culminated in an entirely new and good-natured family. Trevor is an affable slab serif in nature: both heavy and kind. Known for their familiarity and their dark colour, the terminals of slab serifs put additional weight along the line to maintain an inky presence. Their clunky forms reveal slight immaturity and arouse the reader’s sympathy for the subject at hand. Trevor connects with others by consciously riding the line between being personal and commanding.

One goal with Trevor was to pair the robust nature of a low contrast slab serif with more sophisticated elements, such as the ball terminals. So wherever one looks in Trevor, rounded corners rule the day, softening the overall appearance by mimicking ink spread made by old metal type. The easygoing look is tempered by very few inktraps and sharp corners, mostly to the inside of characters and in acute angles.

Whatever Trevor is paired with, it has an altruistic outlook in that it sees the best in others. It’s the neighbourly type family — the neighbour you actually want. Trevor’s almost monolinear weight and high x-height give it a typewriter look in the extralight and light weights, but the whole family was made to work with many other font styles, design work, and information structures. It certainly finds its home in packaging and advertising, its sturdy verticality and narrowness fit the needs of headlines and intro text, and its seven weights are primed for plays and involved text needing many layers of distinction. The black weight is treated like a separate display style with altered ball terminals and serifs to capitalise on the added heft.

Trevor’s seven roman weights cover the Latin A Extended glyph set to bring its kindly and commanding outlook to your projects. Along with alternate version of the ‘R’ in the black weight, its OpenType features include both tabular and proportional lining and oldstyle figures, ligatures, and fractions. The complete Trevor family, along with our entire catalogue, has been optimised for today’s varied screen uses.

A surprising and unconventional slab serif font, great for headlines or short texts. 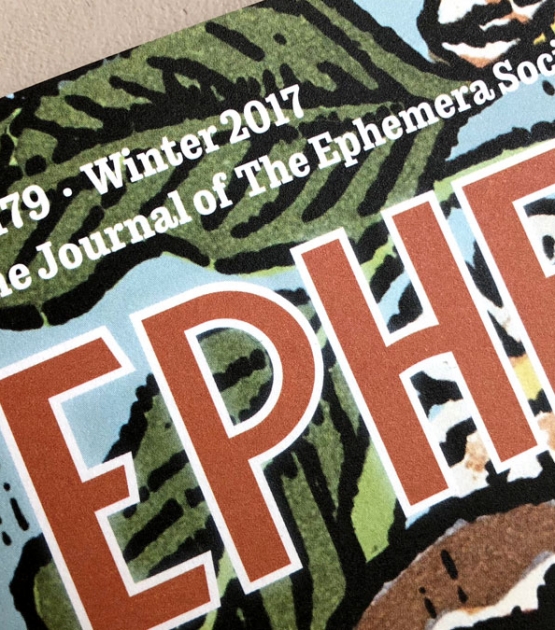 Trevor in use in The Ephemerist, an independent subscription-only magazine featuring writing about printed ephemera from academics and collectors fro...