Stencils are often restrictive and industrial, not expressive and flourished. As a stencil made by calligraphy instead of a machine, Laima is a perfect brand ambassador for album art, upscale venues, special occasions, and packaging.

Laima is a calligraphy-inspired stencil made to look lively & unexpected.

Laima is the brush-formed stencil from Bogidar Mascareñas that will create an ovation for branding, album art, upscale venues, and packaging. If wide appeal, attention to detail, or international reach is necessary for your brand, consider Laima’s high-calibre design as your personal ambassador.

The general font user is accustomed to stencil typefaces that have a brute look to them — industrial, mechanical, restrictive, or even militarised. Stencils are commonly used because they serve a function, like spray-painting over template letters, giving the reader a warning that must be heeded for safety, or a command to follow immediately. Wooden crates and grunge art are the medium and black or red paint are the norm. Laima, instead, creates a stencil from the world of calligraphy to turn all this on its head.

Laima’s 12 stencil styles (six roman and six italic) use the junctures of calligraphic strokes as an opportunity to achieve an uncommon stencil effect, shifting to create unexpected shapes and the illusion of twisted, disconnected overlaps. Inspired by “Arte Nueva de Escribir”, an engravings book published by Francisco Palomares in 1776, Laima progressed well beyond its beginning as a Type and Media Master’s project at KABK, The Hague (NL). It sometimes required completely new character shapes to accommodate the space needed for clear diacritic marks, and was further enhanced with flourishes and alternates for liveliness and variety in individual or branded work.

Laima’s italic begins with swashes and uses OpenType features to automatically turn them off with more than two successive capital letters. Use one swashed character for a drop cap, two for ligatured fun, turn them on or off at your discretion, or change the ascender length and swash shape to suit your creative need. With two styles of numerals and stylistic sets for final forms, Laima’s 12 styles and hundreds of Latin-based languages can turn simple words into an occasion that would immediately benefit high-class brands and special uses. Set that article title, release that new product, code your best-looking UI yet, letterpress that business card, and print that gourmet label. Whatever is next, Laima is the unexpected stencil partner to introduce it to an expectant world.

The Laima project started during
Bogidar Mascareñas’s studies at TypeMedia.

A charming 21st century family that renews a legacy of finesse.

Branding, logotypes, and visual identities; editorials like magazines, fanzines, and posters; and packaging.

Titling family that’s stenciled in appearance, tapping into the archetypes of drama and contemporaneity.

12 styles from Ultrathin to Bold and 12 Titling styles. 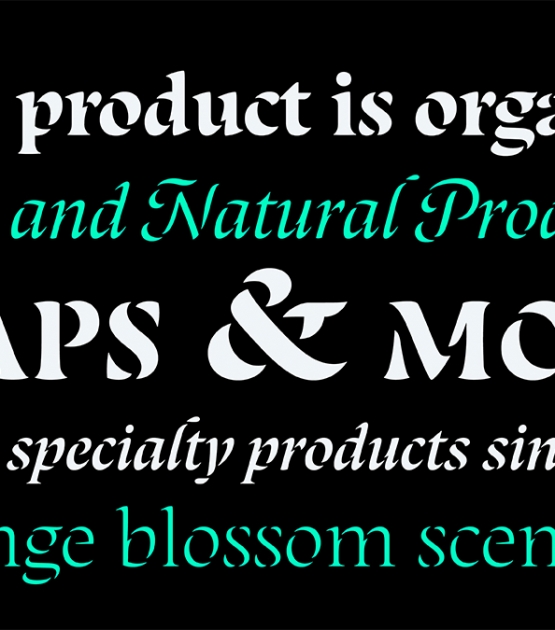 Special occasions need a special font. The Laima font family by Bogidar Mascareñas is precisely that. We are very pleased to introduce this brand-re...