The WWF put out their official count this week and for the first time since 1900 there was an increase in the wild tiger population of the world.

Back in 2010 the official count came in at 3200 tigers worldwide, which is why this year’s total of 3890 is a significant improvement. The WWF is incredibly pleased to report this result and they say it shows a very significant step in the right direction for the wild tiger population. Wild tigers are without a doubt an iconic species of the world that needs all of the protection they can get, and after over 100 years of conservation effort a positive result is finally being seen. Even better news is the fact that the efforts are still ongoing and the WWF is hoping to see year after year gains in the coming years, they’re hoping to see over 5000 wild tigers in the next 5 years possibly

The WWF doesn’t take all of the credit though, they want to make it clear that none of this could have been done without support from governments around the world. Preserving and growing the wild tiger population has been a monumental effort but now that there have been some positive results the WWF expects that the level of support will only continue to grow. This is all absolutely great news and just goes to show that with enough effort we can preserve any of the endangered species of the world that need our help. The WWF also hopes to use this momentum to help raise awareness and support for other endangered species that they are trying to protect.

The Abril font family debuted to great digital and print success, not to mention receiving numerous international awards and design accolades for creators José Scaglione and Veronika Burian. The Abril Titling font family was engineered three years later in response to a precise requirement from the editorial design community which had put Abril into heavy rotation: a low contrast typeface for headlines. Given its broad range of styles, though, Abril Titling deserves to be considered a separate type family on its own merits.

Bringing characters closer together without losing impact or appearance requires more than simply adjusting tracking. It requires modified terminals, a change in weight distribution, and retooling the glyph shape from the internal space outward. Based on the original approach to Abril Text, Abril Titling’s letter shapes are still sturdy, very legible, and carry a newsy and trustworthy feel. The accented editorial style of the Scotch Roman finds continuity in this new type family, but some of the details have been ironed out for improved performance in print and screen headlines.

The Abril Titling fonts were conceived as a family of four different widths: normal, narrow, semi-condensed, and condensed. Each of the four widths has four weights (regular, semibold, bold, and extrabold) plus matching italics — a total of 32 fonts. This wide range of styles allows for setting titles and callouts at almost any size. The wider series is intended for smaller point sizes while the condensed widths deliver a striking and cohesive appearance as front cover headlines.

The Abril Titling fonts were designed as a versatile tool for web and graphic designers looking for a stylish workhorse that maintains high impact. Abril Titling, along with our entire catalogue, has therefore been optimised for today’s varied screen uses. Be sure to check out the rest of the Abril family, Abril Text and Abril Display, for a credible, contemporary interpretation of a classic newsface. Or pair Abril with its intended sans counterpart, Tablet Gothic, the pleasing, comprehensive 84-weight family for extensive editorial use.

7 styles from Light to Black plus matching italics and one decorative style. 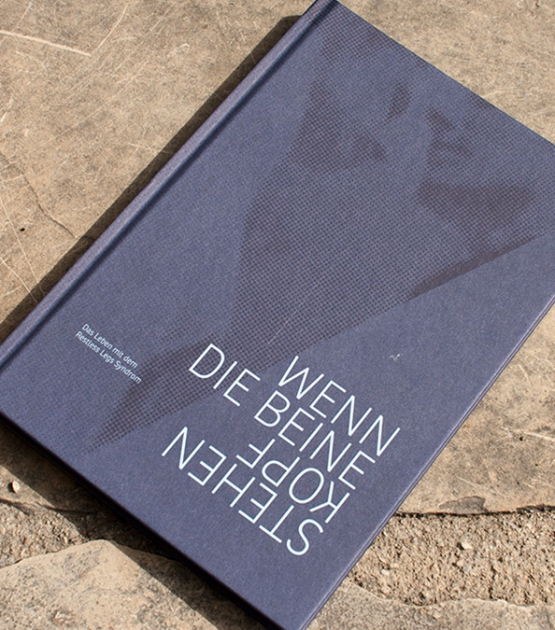 The book Wenn die Beine Kopf Stehen is a practical guide to educate and to raise awareness about RLS (Restless legs syndrome, also known as Willis-Ek...