If code is the present and the future, it’s best to get used to it now. LFT Etica Mono makes that a pleasure with its ability to be used as a true coding font or graphic design element.

Before the advent of the home computer in the early 1980s, substantially more women undertook computer science degrees. According to the National Center for Education Statistics, in the 1984-1985 academic year women accounted for nearly 37% of all computer science undergraduate students. This number steadily dropped as the widespread use of home computers became more common. A 1985 report on the everyday usage of personal computers within the home found that men were both far more likely to use a computer, and to use it for more hours per week than women. Only 27% of men reported not using a computer on a weekly basis, compared to 55% of females surveyed. As of 2010-2011, women made up just 17.6% of computer science students. Much attention has been devoted to studying the reason for this drop in female computer science majors.

The central conclusion is that the first personal computers were essentially early gaming systems that firmly catered to males. While early word processing tools were also available, the marketing narrative told the story of a new device that met the needs of men. As more males began purchasing computers for personal use, the “nerdy programmer” classification began to take hold in the professional world of computer science. By the mid-nineties, the percentage of women studying computer science at the postsecondary level had fallen to 28%. Furthermore, the percentage of women working in computer science-related professions has steadily declined since the 1990s, dropping from 35% to 25% in the last 15 years.

Technical but not limiting, a monospaced sans that encodes the bytes of a beautiful life

Milan-based Leftloft studio has produced a third leg to its hit Etica font family: LFT Etica Mono. Meant to be a coder’s go-to font for everyday use as much as a designer’s way to invoke a certain genre, it is part of a broader and more versatile family that already contains almost 80 sans and serif fonts.

LFT Etica Mono’s ten weights carry the same modern, recognisable DNA of the Etica family while hewing to the defined requirements of a coding typeface: space, density, distinct forms, and clarity. It uses the same instroke on the ‘c’ and open form of the ‘a’ for which the Etica family is famous, but adds something new in the form of an additional italic style.

Monospaced fonts usually incorporate slanted letters as italics, as does LFT Etica Mono, but its default italics have warmer, cursive shapes while the alternate italics are simply slanted. The default ‘a’ is a simplified bowl and stem instead of a two storey shape; the ‘d, f, i, l, t, y’ and others gain an outstroke tail; the ‘e’ is one smooth stroke; and the default ‘k’ is looped. These characters have basic, slanted alternates if the cursive look isn’t desired, and includes a set of arrows and geometric shapes. The monospaced design, by nature, makes the typeface useful in coding and in low readability situations.

And how does LFT Etica Mono work from the designer’s perspective? The starting point was the need for a monospaced Etica companion intended for technical applications: captions in graphic layouts, small text, confined or predefined space, and overall tone. Flat terminals and counters maintain the colour and versatility of the original typeface, but choosing between the organic cursive or blunt slanted alphabet will give every layout its own character. Of particular aesthetic interest may be the & and % symbols.

Designed to be applied to the common visual environment, the new LFT Etica Mono font family completes a more complex system. One benefit is to give an expressive tone — less serious and more friendly — to something inherently technical, to bytes and bots, to encode the beautiful life. 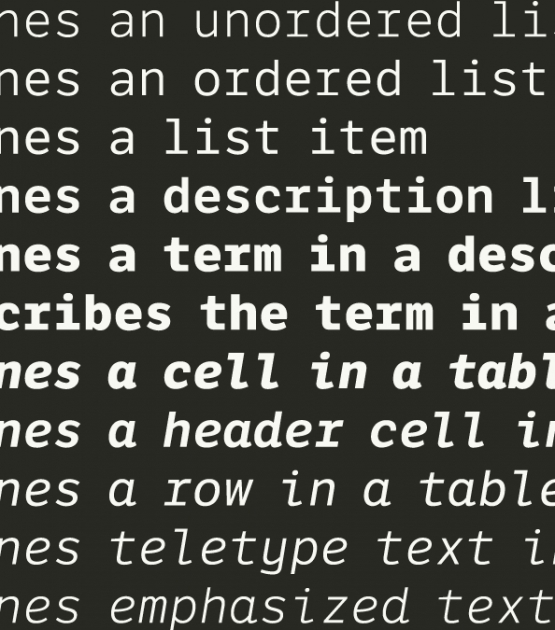 Welcome LFT Etica Mono, the technical but not limiting, monospaced sans that encodes the bytes of a beautiful life.