LFT Arnoldo is a flared humanist sans that is intelligent and refined. Its chiselled structure sets dramatic titles worthy of any classic work, and its calm and dependable nature grounds paragraphs in the now.

Long before arriving this month at the Salone del Libro, an annual book fair in Turin that’s Italy’s largest, I was asking myself this question: Where are the great Italian women writers?

Reading vigils are being held across Italy as fans of Elena Ferrante gather for the release of the author’s new book, her first novel in four years. Ferrante’s Italian publisher, Edizioni E/O, was careful not to give too much away, issuing only a short extract in early September indicating the story takes place in Naples, the same setting for her phenomenally successful quartet of books that began with My Brilliant Friend. The title — La Vita Bugiarda Degli Adulti, which translates roughly as The Lying Life of Adults — was revealed last week and a small group of journalists received an encrypted PDF copy at 1am on Tuesday, giving them little time to read and review the 336-page book.

From titles to paragraphs, this flared humanist sans is a captivating vehicle of aesthetic expression.

LFT Arnoldo began as an all-caps book cover typeface created during the rebranding of Oscar Mondadori, the most important Italian publisher, with over 4,500 titles from ancient classics to contemporary works, and spanning academic essays to children’s and self-help books. For such a diverse catalogue, it was necessary to find a coherent and flexible paradigm which took into account genre and readership differences and ensured harmony among its works. The main idea was to create a typeface suitable for the branding element and which could be used for each title of the immense catalogue.

So what makes LFT Arnoldo a companion to the centuries? Starting with the design of the capital letters, it is first a rational typeface with contemporary proportions. But rationality without style wasn’t enough, so its glyphic nature carries an engraved feeling to resemble letters when chisel is put to stone. Once these two traits were settled, the entire character set was developed as a flared humanist sans in order to complete the family and extend its usage, from titles and display settings to texts.

LFT Arnoldo sets titles with dignified authority to appear digitally carved and more arresting than the usual sans or flared sans designs of the past. It is calm and dependable in paragraph use and a captivating vehicle of aesthetic expression in title and display use. At once rugged and syncopated, the slight hourglass stems and incised details make each letter come alive and engrave each paragraph upon our emotions.

LFT Arnoldo intends to be a resilient type family for centuries to come. Its seven roman weights have italic counterparts and the entire family is loaded with OpenType features: alternates, ligatures, small caps, oldstyle and lining numerals, and science and math capabilities. In the battle of charisma, where the right voice must project intelligence, influence, and refinement, LFT Arnoldo is the victor. 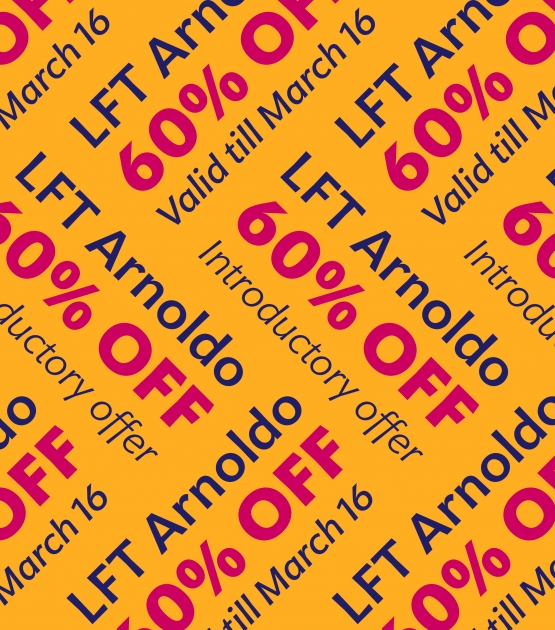 We are very pleased to be able to present LFT Arnoldo with a 60% introductory offer. LFT Arnoldo is a flared humanist sans that is intelligent and re...