Genes explain how the giraffe got its long neck.

Scientists have sequenced the genome of the giraffe for the first time, uncovering DNA that help explain how they developed their long necks.

Being a giraffe is not easy. To pump blood two meters up from the chest to the brain calls for a turbo-charged heart and twice the blood pressure of other mammals. Giraffes also need special safety valves to let them bend down for a drink and raise their heads again without fainting.

The animals’ unique body configuration has long been a puzzle for biologists, including Charles Darwin. Now, by comparing the genome of the giraffe with its closest relative, the short-necked okapi, scientists have unpicked part of the puzzle by pinpointing changes in a small number of genes responsible both for regulating body shape and circulation.

The African Institute for Science and Technology in Tanzania published their findings on Tuesday. The unraveling of the genetic factors behind the giraffe's cardiovascular system could also be instructive for human health, since they appear to avoid the kind of organ damage often found in people with high blood pressure.

A modern and indestructible serif with strong links to tradition.

The Capitolium font family was designed by Dr Gerard Unger in 1998 at the request of the Agenzia Romana per la Preparatione del Giubileo for the Jubilee of the Roman Catholic Church in 2000. This type design was the central part of the project for a wayfinding and information system to guide pilgrims and tourists through Rome. Capitolium also continued Rome’s almost uninterrupted 2,000 year old tradition of public lettering. It is a modern typeface for the 21st century that is strongly related to the traditions of Rome.

Soon after the completion of this project, Dr Unger began contemplating the possibility of bringing this design to newspapers. Though the original Capitolium worked well in most modern production processes and on screens, its original wayfinding purpose meant it was too fragile for the more stringent requirements of newsprint: sturdier shapes, a taller x-height, and more characters per line of text.

The answer to these design parameters was the Capitolium 2 font family, a three-series newsface with classic letterforms springing from Rome’s long and robust type tradition. This elegant type family, composed of Capitolium 2, Capitolium News 2, and Capitolium 2 Headline, includes the addition of over 350 glyphs per weight for full Latin A language support, small caps, new ligatures, four sets of numerals, arbitrary fractions, and superiors and inferiors. Furthermore, kerning was fine-tuned for better text performance.

The primary differences between Capitolium 2 and Capitolium News 2 is their x-height, serif sharpness, letter tracking, and available styles. Capitolium Headline 2 is the titling companion to this editorial type family, beautifully engineered for large sizes and compact setting. Its increased x-height, combined with narrower lettershapes and the Capitolium family’s naturally high stroke contrast, allow for finesse within striking multi-line headlines.

The complete Capitolium 2 family comes in 18 styles (five in Capitolium 2, six in Capitolium News 2, and eight in Capitolium Headline 2), speaks multiple languages, and, along with our entire catalogue, has been optimised for today’s varied screen uses. Please download the type specimen to find out more about what’s new in Capitolium 2. 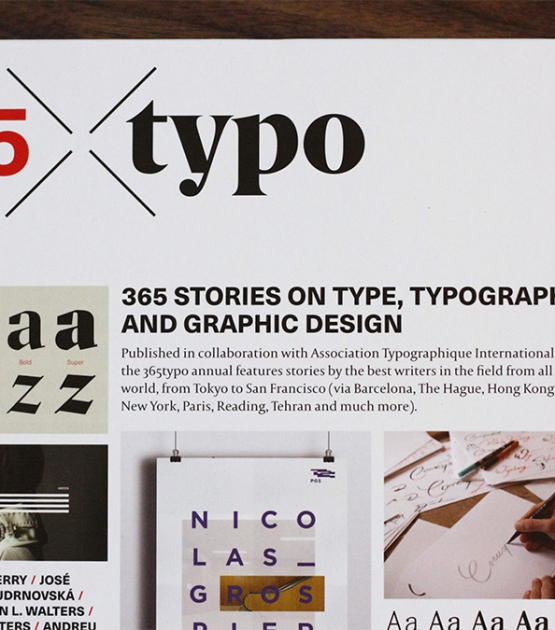 The 365typo annual book is published by the French étapes: éditions in collaboration with ATypI. The publication features 365 key issues in the fie...